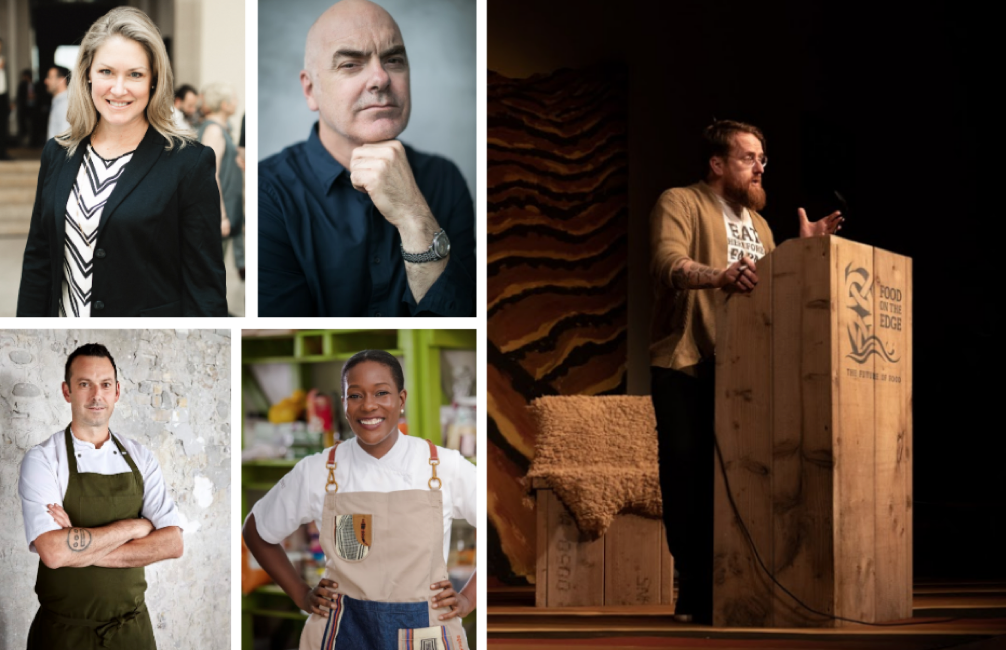 Food On The Edge has announced the introduction of four Co-Curators who will collaborate with Symposium Director JP McMahon to create the most diverse and inclusive Food On The Edge lineup to date. The international food symposium has the aim of generating debate, discussion, and thought leadership on the future of food both in the industry and on the planet, and is taking place in Galway, Ireland on the 19th and 20th of October 2020.

The Co-Curators are Selassie Atadika, Matt Orlando, Arlene Stein, and Mark Best. Each Co-Curator will work alongside JP McMahon to select four people to speak at Food On The Edge 2020.

This initiative has been introduced this year to broaden the horizons of the symposium, and to give a platform to people from all parts of the world who most embody the Food On The Edge ethos and are doing incredible things for the future of food.

JP McMahon, Symposium Director of Food On The Edge, said, “We wanted to bring as much diversity to the lineup as possible and while every year we ask for recommendations, having a selection of people inviting their own speakers will naturally lead Food On The Edge into new and interesting territory. Geographic location was important when selecting the co-curators to ensure we’re involving speakers from all parts of the world. The co-curators have all spoken at Food On The Edge so they understand the ethos and I’m looking forward to them bringing a new dimension to Food On The Edge 2020.”

Selassie Atadika is a chef and humanitarian who has spent over a decade working with the UN. In 2014 she opened Mindu in Accra, Ghana which celebrates Africa’s cultural and culinary heritage. She spoke at Food On The Edge for the first time in 2019, “Last year I finally got the opportunity to participate in Food On The Edge after hearing wonderful things about the symposium for years. I’m excited to come on board as a co-curated this year to help to bring additional voices to the critical conversation about the future of food.  For me, eating is a celebration of food’s origins, the paths it travels on the way to our tables, and the people whom it brings together through the journey. It is only appropriate that in 2020, Food On The Edge is going back to the roots of food and talking about ‘dirt’.”

American chef Matt Orlando has travelled to Galway for Food On The Edge for the past four years. He worked at Heston Blumenthal’s three-starred Michelin restaurant, The Fat Duck and Noma in Copenhagen, one of the world’s best restaurants, before setting up Amass Restaurant in Copenhagen. Matt said, “Over the years that I have been involved with Food On The Edge, I have seen the symposium grow in unimaginable ways. The team behind the symposium is a well oiled machine, that takes the content and personalities of the speakers seriously. The focus on the human aspect of the topics being discussed is why I keep coming back again and again. I grow every year after this symposium and I am honoured to be a co-curator this year. Thank you JP and all of the Food On The Edge team for the opportunity”.

Arlene Stein is the founder and Executive Director of the Terroir Symposium in Toronto, a catalyst for creative collaboration and social and environmental responsibility in the hospitality industry. From her current home base in Berlin, Arlene travels globally to research responsible food systems and gastronomic innovations. Arlene said, “Food on the Edge has made an indelible mark on the food culture of Ireland.  This annual gathering of food leaders is about convening community, sharing knowledge and the power we have to create a better food system.  It’s also about  sharing Irish culture and hospitality with the world, which JP and his team have done so magnificently. It gives me great pleasure to be able to contribute to this meaningful forum as a co-curator and be able to invite some of my food heroes to be part of this exchange.”

Australian chef Mark Best is regarded as an authority on Australian cuisine and is known for his appearances on Netflix’s The Final Table and Masterchef Australia. Following the closure of multi-award-winning Marque in Sydney, he opened Bistro on the Genting Dream luxury ship.

“Having been part of the inaugural Food On The Edge, I am so excited to see it grow and honoured to now be co-curating. Food On The Edge is about the fundamental questions in our industry. There is nothing more fundamental than this year’s theme ‘dirt’. The speakers I have chosen will speak to the essential nature of soil and our very existence”.

Food On The Edge 2020 is taking place on the 19th and 20th of October in Galway, with the venue to be confirmed. Additional world-class chefs and speakers will be announced in the coming months.