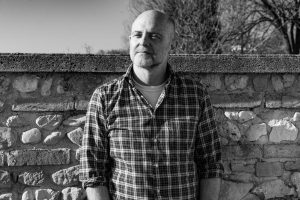 A New Language- Expressing Life and Culture Through Pizza

Denis Lovatel left a lasting impression on those that attended Food on the Edge last October. Now during Covid-19, on hearing that he was to be the first of the ‘FOTE Speaks’ conversations in July, instantly brought me back to that talk. Just seeing his film of him making pizza, in those moments pizza took on a new meaning and left many at FOTE with a ‘mouth-watering’ desire to taste it right there and then!

Denis is a 2nd generation pizza maker based in North-Eastern Italy near the Dolomite mountains. While we all know that pizza is traditionally an Italian dish, he has developed a new concept of pizza. At Pizzeria Da Ezio (his restaurant), pizza is used to promote his locality. Producing a thin and crispy sourdough base he uses wild herbs instead of salt for dough stability and local and foraged produce for the topping.

JP recalled his experience of cooking pizza with Denis at Aniar during FOTE. Using the language of Aniar ingredients at that time (seaweed, duck, oils and chanterelles), his realisation was that pizza can be used as a vehicle to express any culture. While pizza is viewed by many as a ‘fast-food’, JP insists that the future of pizza is in reclaiming the product as a slow food and a local food. He recognised Denis’s approach as an important model for chefs to ask, ‘what is in my locality?’ and to work from there. He reminds us of Christian Puglisi’s approach (Baest,Copenhagen), where pizza is also an expression of his heritage and identity. Aware of a possible resistance by the pizza ‘purists’, both chefs agreed that while tradition needs to be respected, in order for the language of pizza to grow globally, tradition also needs to respect innovation. The possibility of enfolding terroir and producers into the language of pizza will result in greater enjoyment and respect.
In addition to the impact on locale and producers, Denis also highlighted the link between pizza and migration and the role of pizza in food education. For Denis, ‘everyone likes pizza and it can be used as an expression of cultural identity’. JP agreed and that ‘considering the pizza as a flatbread, the language needs to be very open to allowing the food to evolve as people move around the world’. From an education perspective, Denis uses pizza as a language to teach the next generation about food and seasonality. What a creative fun way to communicate this message.

Both chefs discussed the impact Covid-19 had on their relationship with food sourcing and cooking. Mirroring this, during the lockdown, many of us have spoken about baking sourdough, scratch cooking at home, supporting local producers and being more aware of seasonality. I wonder now that we are no longer in lockdown, have these positive habits and intentions abated? Denis’s pizza model encompasses all these intentions. Perhaps this ‘new language’ of pizza could be a practical, creative way to engage/ re-engage us mindfully with life through food?